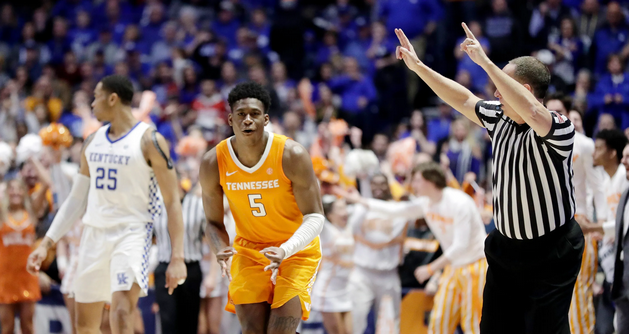 The greatest and most exciting sporting event of the season is set to kick off on Thursday, and people can’t get enough of filling out brackets. Instead of trying to win NCAA Tournament pools, placing a bet on who will cut down the nets is a better option. Here is a look at the current odds to win the NCAA Tournament with a pick thrown in as well. 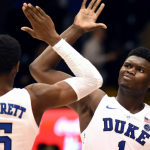 Duke has the best odds by a large margin, and they should. The Blue Devils were impressive in winning the ACC Tournament title, and they have just one loss when fully healthy this season. Zion Williamson has proven himself as the best player in the country, and RJ Barrett and Cam Reddish are NBA Lottery picks. The Blue Devils are loaded.

Everyone remembers Virginia being the first number 1 seed to lose to a 16 seed a season ago, but the Cavaliers are back. Virginia is once again the top defensive team in the country, but they can score better on the offensive end. The Cavaliers won’t let history repeat itself this season.

Gonzaga is the only team to beat Duke this season when the Blue Devils were fully healthy, and the Bulldogs have a ton of elite talent. The Bulldogs once again coasted through the West Coast Conference but stumbled in the tournament game in a loss to Saint Mary’s. Everyone seems to agree that this is head coach Mark Few’s best Gonzaga team. 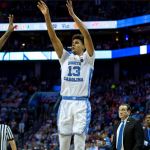 North Carolina shared for the ACC regular-season crown with Virginia, and the Tar Heels beat Duke twice this season. The Tar Heels almost beat their rival a third time, but Zion Williamson took over. North Carolina plays extremely fast, and they can score in a hurry. The Tar Heels won’t be an easy team to beat.

Tyler Herro and PJ Washington lead an extremely talented Kentucky team. The return of Reid Travis gives the Wildcats some veteran leadership, and Kentucky has the depth to play with anyone. John Calipari has his team defending at an elite level, and that will carry them.

The Spartans are always a contender in March, and they enter the tournament with a ton of momentum. Michigan State is led by point guard Cassius Winston, but they have some studs in the paint as well. Bet against Tom Izzo if you want to, but Michigan State has a real chance to win this thing.

Tennessee is one of the most experienced teams in the country this season, and they can really score the ball. Admiral Schofield and Grant Williams get all the hype, but the Volunteers are deep. If Tennessee gets to the Elite Eight, a matchup with Virginia should be looming.

Michigan was a Final Four team a season ago, and John Beilein has his team back in contention this season. The Wolverines are just behind Virginia in terms of best defense in the country, but Michigan struggles to score at times. If Michigan makes shots, they can beat anyone.

Texas Tech had a terrific Big 12 Conference season, but they aren’t a real title contender. Forward Jarrett Culver is a future NBA star, but he is all the offense for the Red Raiders.

Auburn set a new SEC record this season for three-point field goals per game, and they shoot at a ton of them. The Tigers made them all weekend long in the SEC Tournament, but they are a bad shooting night away from getting bounced early.

The most intriguing team from this group is the Florida State Seminoles. Florida State upset Virginia in the ACC Semifinals and battled Duke in the title game. Head coach Leonard Hamilton has a deep and athletic team that could bust some brackets this year.

This is a very interesting group of teams, and all three of them seem to have Final Four potential. Houston dominated the American Athletic Conference this season, and the Cougars can really score. Iowa State might be the best shooting team in the tournament, but they have some head-scratching losses. LSU will be without their head coach, Will Wade, but the Tigers have freakish athleticism. One of these teams might get hot and make a deep run, but they could also lose in the first weekend.

There are certainly some teams in this group that are worth looking at, but realistically they don’t have a chance to win the whole thing. There might be a Final 4 team from this group, but that’s about it.

The two best teams in the country this season are the Duke Blue Devils and North Carolina Tar Heels. UNC was able to beat Duke twice this season, but Duke won the most recent game. I think that they will meet up in the NCAA Championship Game, and Duke will even the score by beating North Carolina for a second time. Bet the Duke Blue Devils +225 to win the NCAA Men’s Basketball Championship.