The 2018 NCAA Football season is entering the final stretch and the top teams are trying to punch their tickets into the conference championship games. There are a ton of great rivalry games on tap for this weekend, including a ton of top-25 showdowns. Let’s take a look at the five best NCAA Football games to bet on this weekend.

The Georgia Bulldogs will host the Florida Gators in a key SEC matchup on Saturday afternoon. Both teams come into this game with an identical 6-1 record, and are tied atop the SEC East division. Georgia saw their perfect season come to an end in their most recent game, a 36-16 loss to LSU. Florida has rattled off five straight wins after suffering a loss to Kentucky in week two. This should be a low scoring game as both teams are in the top-15 in the nation in total defense. Georgia has the small advantage of playing at home, but Florida will keep this game close. Bet the Florida Gators +7.0 in this game. If you are living out east and betting this game, check out some of the top West Virginia sports betting sites to place your bet at.

Penn State will host Iowa in an important Big Ten battle for each team. The Penn State Nittany Lions come into this game with a 2-2 conference record after losing to Ohio State and Michigan State. Iowa’s lone conference loss came against the University of Wisconsin, but they have won three straight games since that loss.

This is a game of contrasting styles as Penn State features a top-10 offense and Iowa sports a top-10 defense. Look for Penn State quarterback Trace McSorley to have a big game against the Hawkeyes in a relatively easy Penn State win. Iowa just doesn’t have enough offensive firepower to hang with the Nittany Lions. Bet Penn State -6.5 over Iowa on Saturday. 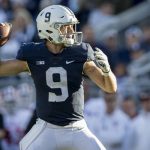 One of the more interesting games of the weekend will take place in Columbia, Missouri on Saturday. The Missouri Tigers are a seven-point favorite over the Kentucky Wildcats despite their records. Missouri comes into this game with a 0-3 record in the SEC, while Kentucky is in first place of the SEC East with a 4-1 conference record. Missouri quarterback Drew Lock is one of the most talented players in the country, and he is capable of leading the Tigers offense to a big day.

Kentucky meanwhile has given up just 12.9 points per game this season, which is the second-best mark in college football. Missouri will definitely score more than 13 points in this game, but Kentucky’s defense is for real and they will slow down the Tigers. Kentucky has been proving people wrong all season, and that trend will continue in this game. Bet the Kentucky Wildcats +7.0 over the Missouri Tigers on Saturday.

Another surprising team, Washington State, will travel to Stanford to take on the Cardinal in a top-25 Pac-12 showdown on Saturday night. Both of these teams are tied in the Pac-12 North with a 3-1 record, just one half game behind the Washington Huskies. Stanford running back Bryce Love is listed as questionable for this game, and his absence would be a huge blow to the Cardinal chances.

Washington State is the top passing team in the country, averaging more than 400 passing yards a game this season behind quarterback Gardner Minshew. Stanford will try to control the time of possession and keep the ball out of Minshew’s hands in this game, but without Love that task becomes hard. The Cougars are coming off of an impressive win against the Oregon Ducks in week eight, and their momentum will carry over into this game. Bet the Washington State Cougars +3.0 on the road against Stanford in this game.

The Texas Longhorns will try to pick up their seventh straight victory when they head north to take on Oklahoma State this weekend. Texas has vaulted to the top of the Big 12 standings with a 4-0 start, while the Cowboys have gone 1-3 to begin conference play. The Oklahoma State defense has been letting them down in recent weeks, and they got torched by the run against Kansas State.

Texas will look to keep the ball on the ground with starting quarterback Sam Ehlinger nursing an injury to his right throwing shoulder. The Texas offense has been impressive in all of their big games so far this season, and there is no reason to think that Tom Herman’s team won’t perform the same way on Saturday night. Oklahoma State will find some success on offense, but Texas will outscore the Cowboys and earn their seventh straight victory. Take a look at the College Football Week 9 Betting Odds and Predictions.