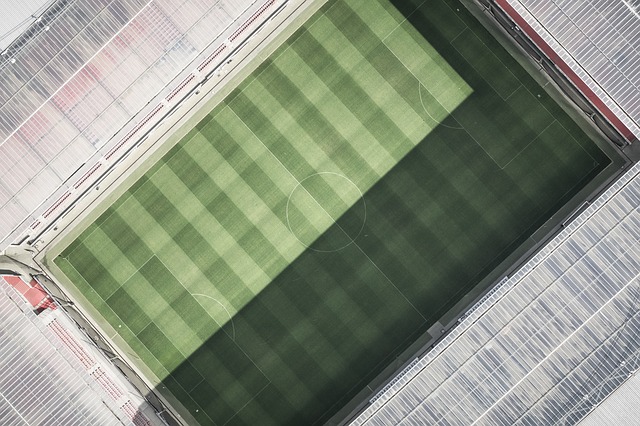 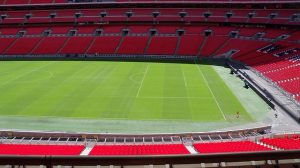 season, adding the Carabao Cup to the Community Shield that they won in August at Wembley, both of those wins coming against Chelsea.

This week though, City will be turning their attention back to the Premier League where they, along with the other 19 teams, face two games in the space of four or five days as we have a full midweek fixture list for Tuesday and Wednesday nights, followed by a full weekend of games across Saturday and Sunday.

Remember, if you fancy a flutter on any of the Premier League games shown below, or indeed on any other match over the course of the season, then bet365 is the place to head. Not only is Live Streaming and In Play betting available for a wide range of sports, but you can also sign up with the current bet365 Sport New Customer Promotion and receive up to £100 in bet credits once you are up and running on the site.

There’s some big games to look forward to this week, especially for Tottenham who face two massive games against London rivals Chelsea and Arsenal. Plus there are crucial six-pointers at the bottom of the table too with Fulham in particular facing two games that manager Claudio Ranieri must feel are must-win games for his team. 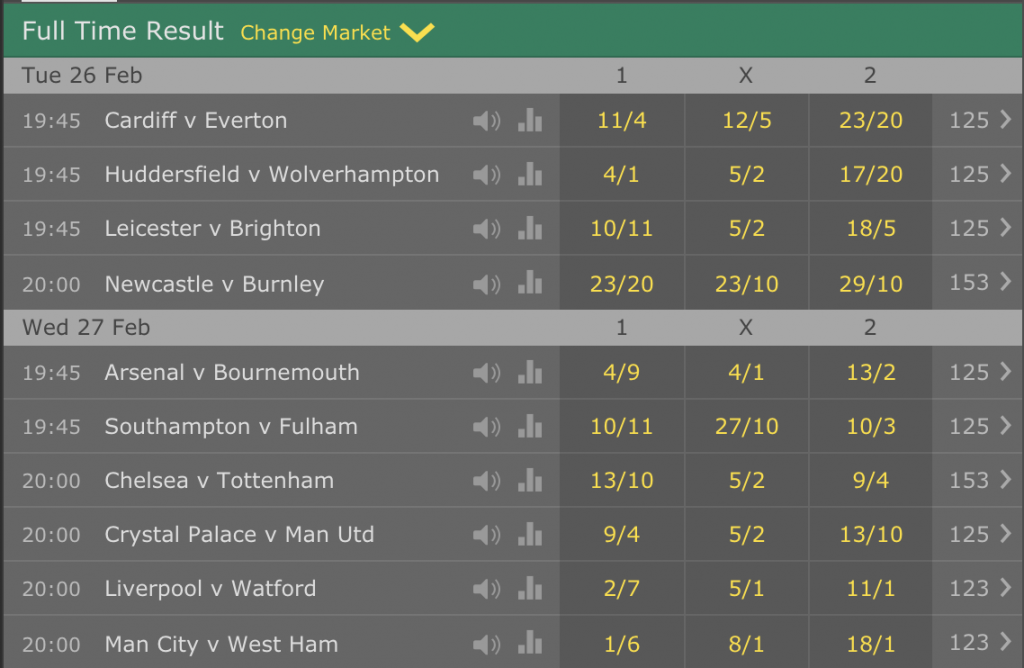 *Odds shown are correct as of 10.40am on Tuesday 26th February

This isn’t the easiest game to call as neither side is in particularly great form. Cardiff were humbled at home by Watford last time out and Everton’s away form has been inconsistent. I can see both sides scoring a goal and if one team are to win it, I think it may just be Everton although I would not expect that to be by more than a single goal.

A vital game for Huddersfield who are now at the point of no return and need to pick up wins. But I can’t see that happening against a Wolves side who have been in excellent form over the last few weeks and are showing excellent fighting spirit to the death in many games. As such, I am backing the Wolves side to come away with the points here.

With Claude Puel now sacked, Leicester fans will be expecting a reaction from their team in the game against a struggling Brighton and I think they will get it. After losing 4-1 at home last weekend, the Foxes will have to put it right here against one of the out of form sides in the Premier League and I think they will do precisely that.

This is a tough game to call. Both sides perhaps lack a little bite in attack but are strong defensively and both are in relatively decent form. I can’t see there being too many goals here and it could well end up as a 0-0 draw, hence I am backing this one to finish all-square.

Although their away form has been pretty poor, Arsenal have been strong at home in recent weeks and I’d expect that to continue against a Bournemouth side that are not only consistent but who don’t have the best of records against the top six sides in the Premier League. This should be a comfortable win for the Gunners.

This could well be the most crucial game of the season for both sides. A win for Southampton moves them 10 points clear of Fulham, a win for Fulham cuts that gap to four points to the Saints.Home advantage and the fact Fulham still concede too many goals is the crucial factor here and I think Southampton will just about earn the victory.

This is a crucial game for both sides, for Chelsea to improve their chances of a Champions League place at the end of the season and for Spurs to keep the pressure on Man City and Liverpool at the top of the table. Chelsea’s record at home against Spurs is pretty good and I think Sarri has a point to prove here and as such, I am going against the perceived wisdom and backing Chelsea to win.

I’d have backed United to win this game ordinarily, but two things changed my mind on that. First is Manchester United’s lengthy injury list and secondly is Palace’s improved form in front of goal against Leicester at the weekend. If Palace can take their chances with such aplomb again tonight, then I fancy they could well earn a point from this tough game.

After two games without scoring (or conceding), Liverpool need a win and a decent performance against Watford at Anfield. Watford will be no pushovers having won 5-1 in Wales against Cardiff last weekend, but I still feel that the Reds should be more than capable of getting back to winning ways in this one.

Manchester City do tend to enjoy their games with West Ham in recent times and have inflicted some heavy defeats on the Londoners in those games. In truth, I can see the same thing happening again at the Etihad this week. 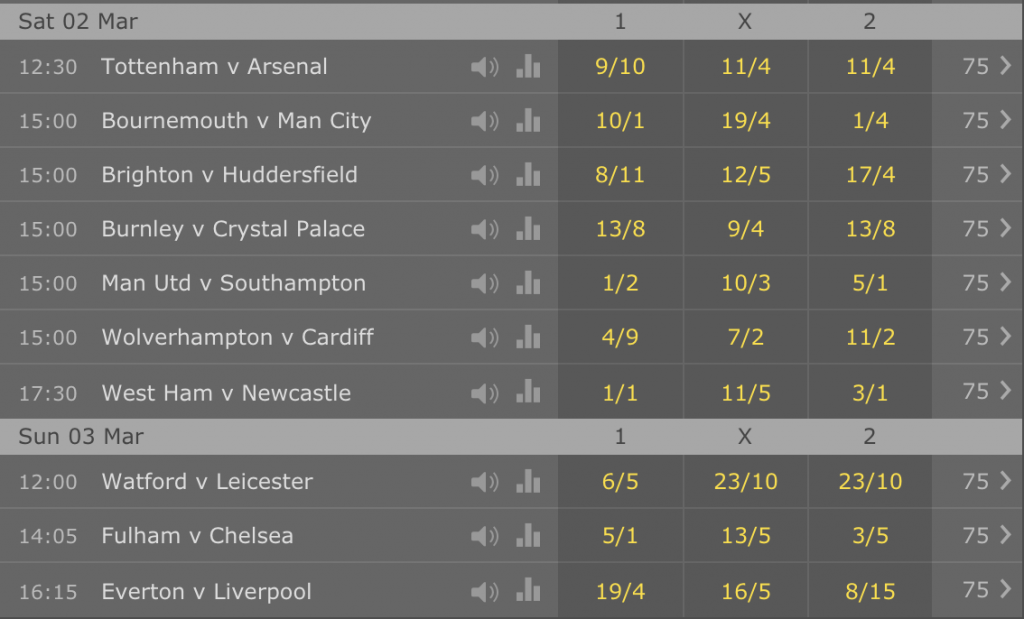 *Odds shown are correct as of 10.40am on Tuesday 26th February

Spurs second London derby in two games will be a huge one against Arsenal. The Gunners away form at the moment isn’t particularly great and with Spurs welcoming back Harry Kane from injury, I feel that they will want to put one over their rivals here and will likely do so.

After playing Arsenal in midweek, it doesn’t get any easier for Bournemouth with the visit of Manchester City. City are in superb form of late and Bournemouth are so inconsistent. I can’t see this being a great day for the home fans to be honest as I am expecting a relatively comfortable win for the visitors.

Brighton are in desperate need of picking up some points as they have been in free-fall down the Premier League table of late but a home game against Huddersfield is about as easy as it gets and the Seagulls should claim the win here. If they don’t then there’s going to be a worrying few weeks ahead for Brighton fans.

Burnley will have played two of the teams closest to them over the last two games and I think they will be happy to come out of those games with a couple of points. Palace are a dangerous side and I think are the better attacking team, but I feel Burnley’s improving back line can keep Palace’s attack quiet and ensure that this one ends all-square.

It’s a very tough test for Southampton to head to Old Trafford, even with United having a number of players missing through injury. The Saints form under Ralph Hassenhuttl has improved but they are still very much in danger and at the end of this game, I don’t feel their league status will have improved any.

I’ve been so impressed with Wolves this season and especially of late, with their determination to get something from matches that they have been behind in. Cardiff are struggling but that was to be expected this season and in truth, I can’t see them getting much from their trip to the Midlands at the weekend as I expect a comfortable win for the home side.

The Hammers have beaten some good sides at the London Stadium this season and while I think Newcastle United will give them a test, I feel that the quality the Hammers possess going forward is going to be the difference between the teams as I can’t see the Newcastle back line keeping West Ham out over the 90 minutes.

Two mid-table sides who should not be in any danger of the drop but I think Watford have been the more consistent this season, although Leicester have beaten some of the top sides. This is a tough game for any team and I think the Foxes may be forced to accept a point from their trip to Vicarage Road.

It’s another London derby for Chelsea at the weekend following on from their game with Spurs but this one should be a little easier for them against a Fulham side who I think are already doomed to relegation. Chelsea’s away form of late is shocking, but even so, they should have more than enough quality to take the win here.

Everton will be massively fired up for this game especially after how they went down to a last minute defeat at Anfield in the autumn. Liverpool though need to string some wins together and while this will be a war of attrition at times, I still feel the Reds have enough quality to claim the victory.