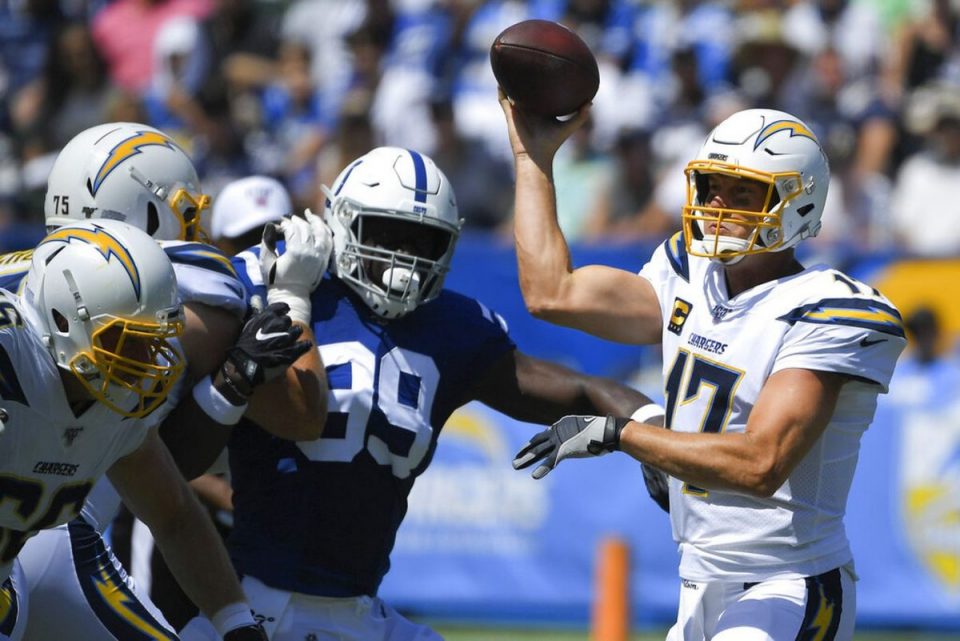 Week 1 of the 2019 National Football League season is now over, and there were plenty of surprises. Some of the top teams in the league really stood out in Week 1, and it was pretty easy to identify who the worst teams are. As we are looking at the Week 2 schedule, let’s talk about five of the sure-fire bets to cash in on this weekend in the National Football League.

The Los Angeles Chargers head up to Detroit to take on the Lions on Sunday afternoon. It’s never easy for a West Coast team to play an early-morning game on the road, but it shouldn’t matter much in this game.

The Chargers were one of the best teams in the NFL a season ago, and it looks like they are picking up right where they left off. The Chargers began their 2019 season with a 30-24 victory over the Indianapolis Colts, and their offense did not miss a beat without Melvin Gordon.

Detroit looks like it is going to have another rough season in 2019. The Lions looked like they were headed for a 1-0 start, but they fell apart in a big way in finishing Week 1 in a tie with the Arizona Cardinals. Detroit is never easy to beat at home, but the Chargers are just too good. Bet the Los Angeles Chargers -2.5 over the Detroit Lions in this game.

The New England Patriots might have had the most impressive victory in Week 1, and they did it in dominating fashion. The Patriots blew out the Pittsburgh Steelers, finishing the game with a 33-3 victory. New England should also be getting Antonio Brown on the field in this game, and the Patriots’ offense should be able to score points in a hurry.

Miami played about as bad as possible in Week 1, losing its season opener by a 59-10 score to the Baltimore Ravens. Most people expected that the Dolphins would be bad this season, but this was on a whole new level. This game won’t be close at all, and the Patriots are going to roll. Bet the Patriots -19.0 over the Miami Dolphins in Week 2.

The Pittsburgh Steelers got absolutely stomped on Sunday night by the New England Patriots. Pittsburgh had a tough 2018 season, and their 2019 campaign could not have gotten off to a worse start. The Steelers have to hope that playing at home can get their season going.

Seattle earned a 21-20 victory over Cincinnati in Week 1, but it did not play well. The Seahawks are tough to beat at home, and they used their home-field advantage to get a big second-half victory. Seattle is going to have to start scoring more points if it is going to have another solid season in 2019.

This should be a very competitive game, but the Steelers are going to come away with this win. Bet the Pittsburgh Steelers -4.0 over the Seattle Seahawks in this Week 2 matchup.

The best game of the weekend will likely be this matchup between the New Orleans Saints and Los Angeles Rams. This is a rematch of the 2018 NFC Championship Game that ended in plenty of controversy. Both of these teams came away with a win in their season openers, and this game could go a long way towards figuring out the playoff picture in the NFC.

New Orleans is almost impossible to beat at home, but it isn’t as good on the road. The Saints really struggled on defense in the season opener, and that isn’t a good trend against the mighty Rams.

Los Angeles looked sharp in its Week 1 victory over the Carolina Panthers, and the Rams will be ready for this game. Revenge is a big motivator, and that’s why we are taking the New Orleans Saints +2.5 over the Los Angeles Rams in Week 2.

The Sunday Night Football game features a pair of NFC teams that have been in the Super Bowl in recent seasons. This game also features a pair of future Hall of Fame quarterbacks, and there will be plenty of points scored in this game.

All The Top Weekend Premier League Previews and Tips