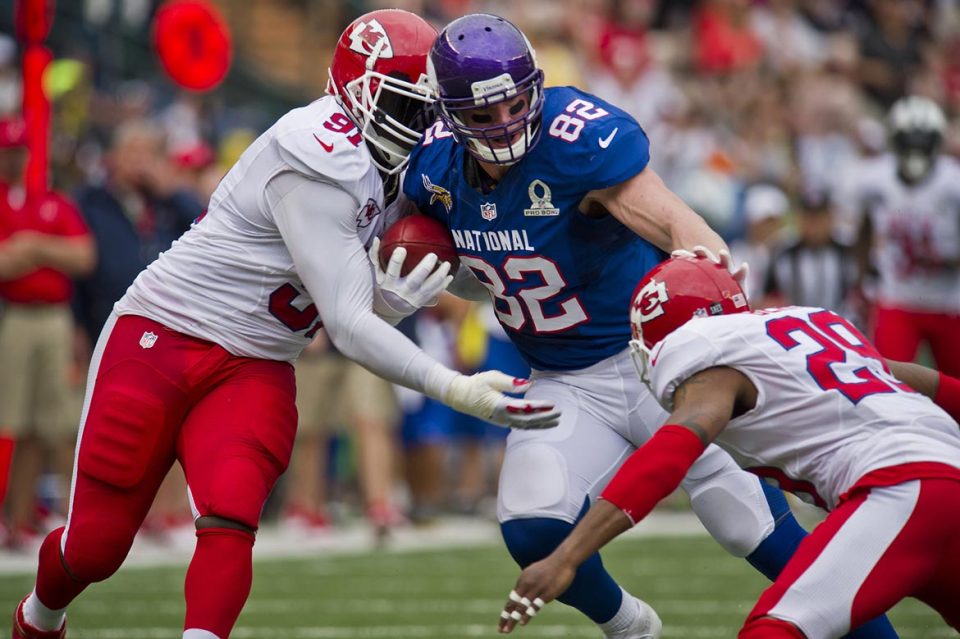 The new regular season of the NFL got underway last week and considering the drama of the last few weeks of the regular season and the playoffs last season, it seems as if the new season is going to follow a very similar trend.

In an incredible weekend of action, we saw nine matches decided by one score or less, five of those by three points or less. We also had one tied game, and one that was decided by a successful field goal (after two were missed) right at the end of overtime.

We saw one team win a game by going for a two-point conversion, rather than kick a game tying extra point, the Super Bowl Champions of last season humbled in their back yard by the favourites to follow them this season and some much fancied teams go down to defeat, while others performed way better than pundits had expected.

It all means that if you had an NFL bet with bet365 this weekend, you’ll likely have been on the edge of your seat as teams battled to land the win right down to the last seconds, or even in overtime, in many games.

If you are not yet signed up with bet365 Sport, join today and remember to claim the welcome bonus offer and use our special bet365 sign up code BET247 when you join!

Let’s now recap how the opening weekend of action went, before we preview the games coming up for Game Week 2 of the new season.

The Bills confirmed they are genuine Super Bowl contenders with a surprisingly easy win over the current holders at SoFi Stadium, QB Josh Allen and WR Stefan Diggs starring for the Bills.

Despite a spirited fightback from the Lions, the Eagles held on to land the win in the highest scoring game of the weekend, but Lions HC Dan Campbell should be pleased with the efforts of his team.

At a rain-swept Soldier Field, Trey Lance and the 49ers struggled against a superb Bears defence, while Justin Fields won the battle of the Year 2 QB’s inspiring the home team to an unexpected win.

In a crazy game, Joe Burrow committed five turnovers but still almost won the game for the Bengals in regular time. In OT, both teams missed kicks before the Steelers landed the win with a successful field goal as time expired.

Worrying times for Patriots fans as the Dolphins ran out easy winners in Miami, with WR Tyreek Hill making a very promising start for his new team alongside QB Tua Tagavoiloa.

Panthers QB Baker Mayfield couldn’t inspire Carolina to a win over his former team as the Browns rushing attack in Chubb and Hunt in particular proved too hot for the Panthers to handle.

The Colts fought back from a 20-3 deficit to tie the game and force overtime as the Texans looked set to land the win. Neither team could score in the additional time leading to a rare tied game.

The Atlanta Falcons looked set for a surprise win, but the Saints came back strong with Saints WR Michael Thomas scoring two key touchdowns on his return from injury to the team.

The Jets struggles on offense continued as the Ravens rolled them over at the Meadowlands. Baltimore can play much better than this but even so, they still were easy winners.

Both teams will take some positives from this game, but it was the Commanders that landed the win with Rookie WR Jahan Dotson scoring two vital touchdowns on his NFL debut against the Jags.

It was a miserable day for the Pack and Aaron Rodgers as the Vikings shut down the current NFL MVP to claim a superb win with QB Kirk Cousins and WR Justin Jefferson shining for the Vikes.

Giants HC Brian Daboll risked everything on a two-point conversion late in the game to take the lead after some strange Titans play-calling put the home team behind the 8-ball. Their frustrations were compounded when Titans kicker Randy Bullock missed a field goal as time expired which would have won the game.

A very tough AFC West clash saw the Chargers land the victory over the Rams with the home team intercepting Raiders QB Derek Carr three times which proved key to their eventual victory.

The Chiefs defense may concede points, but their offense remains as potent as ever with QB Patrick Mahomes, RB Clyde Edwards-Helaire and TE Travis Kelce all having big games as the Chiefs won very comfortably and in some style.

An injury late in the game to QB Dak Prescott that will see him miss several weeks compounded a miserable night for the Cowboys as the Bucs and QB Tom Brady landed an easy opening day victory.

Broncos’ new QB Russell Wilson had a miserable return to the club he left this summer as the Seahawks, inspired by Geno Smith, landed a surprise win over the fancied Broncos.

Tip – Expect plenty of points between these two high-scoring offenses and take the over 54.5 Points (10/11)

Tip – If any team has a secondary capable of dealing with the Dolphins WR corps, it is the Ravens. As such, I expect Baltimore to land another win here, covering the -3.5 spread (10/11)

Tip – Neither of these teams impressed me greatly last week, but the Browns did win and I think they’ll do that again here against the Jets. Take a punt on the Browns scoring exactly 24 points here which is a 12/1 chance.

Tip – Both these teams did better than expected, but I think Dan Campbell is really getting the Lions set for a much better season. I see them claiming their first win here and I like them to cover the -2.5 spread at 10/11.

Tip – The Colts season ended in a shocking defeat to the Jags last season, they’ll want revenge for that here, but their record against Jacksonville is poor (8 defeats in the last 13 games). I’m backing the Jags ere on the Money Line at 17/10.

Tip – A key NFC South clash. The Saints did well to land a comeback win but it is hard to see their offense enjoying as much success against the Bucs. I’m taking Tampa to win a close one here and to score over three touchdowns in the game at 23/10.

Tip – The Panthers ran the Browns close, while the Giants edged out the Titans on week 1. This will be close too, but I am backing the Giants to win by 1-6 points at 3/1.

Tip – Both these famous franchises have issues, but I feel at Heinz Field, the home town Steelers should have enough to claim the win. I’d back the Under 40.5 points market here at 10/11.

Tip – The Los Angeles Rams need to bounce back after the loss to the Bills. I take the Rams to win and over 47.5 Points (11/10) against the struggling Falcons here.

Tip – Joe Burrow will be itching to put right last week’s debacle. The Cowboys have no discernable offense. The Bengals should win this big. Take them to win by 19/24 points at 7/1.

Tip – The Texans played hard against the Colts initially but fell away in the second half. The Broncos know that they can’t afford another sip here. Take the Broncos to win by 7-12 points at 4/1.

Tip – The Raiders showed plenty of positives in their loss last week to the Chargers. The Cardinals were far less impressive against the Chiefs. Take the Raiders to cover the -5.5 spread here at 10/11.

Tip – I expect Chicago to push Green Bay close here and with the handicap set at +10, I’d back the Bears to cover the spread here at 10/11.

Tip – I was unimpressed with the Titans play calling on offense, and defensive play in their loss to the giants. I expect the hugely impressive Buffalo Bills to win big by 25-30 points (10/1)

Tip – Two teams that played very well on Week 1. Eagles have home advantage and that may well be key here. I do expect plenty of points, so take the Eagles to win and over 51.5 points to be scored (23/10)

*All odds shown above were correct with bet365 Sport at the time of writing but may have changed in the meantime.

Play Bet365 Goals Giveaway For Free And Win Up To £10 In Bet Credits Each Time!