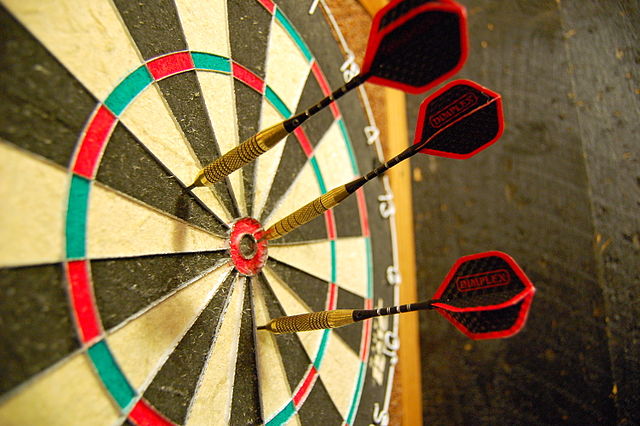 On Thursday 14th December, the 2018 PDC World Darts Championship gets underway at the 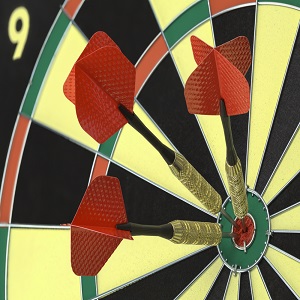 Alexandra Palace in London. 72 of the world’s finest players will be competing to take home the most coveted prize in darts, the title of the 2018 PDC World Darts Champion.

This year the stakes are even greater with the highest ever total prize pool available of £1.8m, with the winner guaranteed to take home £400,000, which is £50,000 more than Michael Van Gerwen pocketed when he lifted the trophy the last time around.

This means that the players that are knocked out in the Second Round of the tournament will each take home £18,500, which is £2,500 more than the £16,000 won by the 1994 Winner of the event Dennis Priestley when it was first held following the acrimonious split from the BDO.

Last year’s event also saw some records broken with Gary Anderson hitting the most individual 180s in the World Championship in history with 71 and many experts feel that this record could well be under threat again in 2018, if not from Anderson, then from the likes of Michael Van Gerwen and Peter Wright.

How is the tournament organised?

The first round of the tournament consists of 32 matches between 64 players. So far, 56 of these players are known and have been drawn. There are 8 places in the First Round still available and these will be decided in the first match played each evening from Thursday 14th to Thursday 21st December.

These eight Preliminary Round matches will put two players against each other in a shorter format (Best of Three) matchup. The winner of that game will then go on to play in the last game of the night in the First Round proper against one of the seeded players in the tournament.

The draw for the Preliminary Round is as follows:

There are several prominent names in this draw including Paul Lim, who landed the first ever televised nine-dart finish back in the 1980s, Jeff Smith, a former BDO Lakeside World Finalist and Brendan Dolan, who is a winner of a Major event but who has struggled for form for the past 18 months. Youngsters Jamie Lewis and Cody Harris are also two players to watch out for in the future.

Who are the seeds?

The 32 top seeds for the World Championship are listed in the table below:

What are the potential upsets in the first round?

There are a couple of potential banana skins for top-ranked players in the First Round, a notorious part of the tournament for top seeds as it is over a much shorter format and means that lesser players do have a chance of an upset.

Michael Van Gerwen faces a tough task against former BDO World Champion in Christian Kist in what could be a real test for the massive favourite for this event. Similarly, Dave Chisnall who has been out of form of late, could find himself in real trouble if he is below his best against the big-scoring Dutchman Vincent van der Voort.

Fifth seed Mensur Suljovic also got a tough draw as he faces former finalist here in Kevin Painter in what is an eye-catching first round tie, while Jelle Klaasen against Jan Dekker, Stephen Bunting against Dmitri Van den Bergh and Daryl Gurney against Ronny Huybrechts are all tough draws for the seeds.

Who are the likeliest winners of the World Darts Championship? 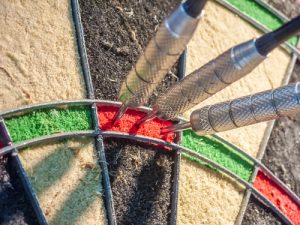 A quick look at the betting for the 2018 World Darts Championship reveals that at 8/11, Michael Van Gerwen is the runaway favourite to win his third world title.

It is really difficult to argue with these odds when you consider the form Van Gerwen has shown particularly over the past three years where he has, at times, been unbeatable. He has racked up a total of 26 Career Major Wins in total now and only Phil Taylor has more than him in the PDC at present.

If you are looking at who could possibly dethrone the current champion then the spotlight falls chiefly on two Scotsmen.

Peter Wright’s form and consistency has seen him creep ahead of Gary Anderson in the World Rankings now and the unflappable scot, known for his showmanship and crazy haircuts, certainly has the game to cause Van Gerwen major problems if he plays to his best, but unfortunately Wright only has one Major win to his name, the UK Open this year, and although he reaches many semis and finals, he does not tend to convert them into wins.

Gary Anderson has landed five Majors in his career so far, including the World Championship twice, so he knows what to do to win here. He is also arguably the only player at present who could match Van Gerwen dart for dart when both are playing at their very best. Anderson’s problem which dogs him at times can be his finishing however and when this deserts him, he tends to unravel. At his best, Anderson is likely to be Van Gerwen’s most dangerous opponent.

Outside of those two, it will be an interesting final World Championship for the legend that is Phil Taylor. Although now past his best, Taylor still won the World Matchplay this yeat for the 16th time and his record of 14 wins in this event will likely never be matched, even by Van Gerwen. At his best, Taylor would have been more than a match for Van Gerwen, but in his last ever event is it too much to ask for The Power to shine one last time? There will be plenty of fans hoping that at 12/1 he can finish his career on a high.

The action gets underway on Thursday night and you can enjoy all the top pre-match and In Play betting with Coral throughout the duration of the Championships.

Week 14 In The NFL Brings Some HUGE Games