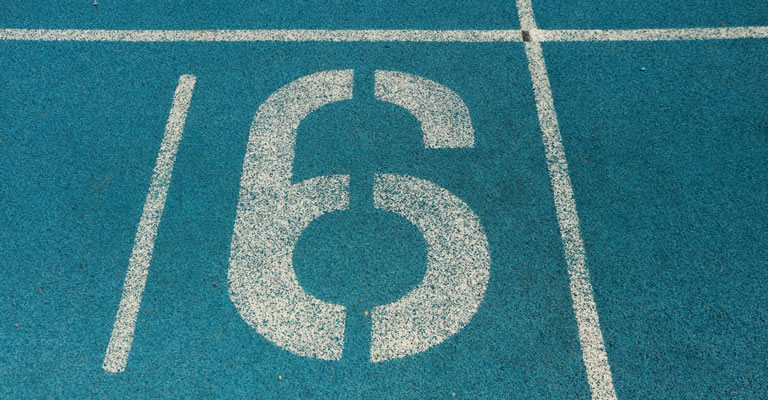 [toc]One of the bonuses of having a SkyBet account is that occasionally, your account will bring you additional bonus deals, such as being able to enter the hugely popular Soccer Saturday Super 6 game
completely free of charge.

In addition to that you can also play in Sky’s hugely popular Fantasy Football game with your SkyBet Login offering you a free chance to play in a number of different leagues, as well as setting up your own leagues with friends.

As well as taking advantage of the fantastic SkyBet free bet bonus you sign up with the company, there is now another superb reason to get yourself a SkyBet account. That is the brand new Fantasy Six-A-Side game, which in every game round, offers punters the chance to win £10,000.

Let’s now take a look at this brand new game by answering some of the key questions you may have about this new promotional item from Sky Sports and Sky Bet.

What do I need to play Sky Fantasy Six-A-Side? 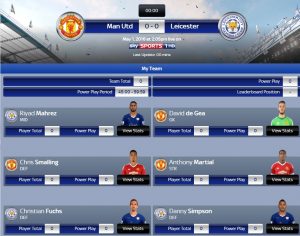 All you need to play Sky Fantasy Six-A-Side is a SkyBet account. You can get this by joining SkyBet and accessing the superb New Player Offer outlined above when you sign up. You also get a SkyBet account if you join any of SkyBet’s partner sites, Sky Poker, Sky Casino, Sky Games, Sky Vegas or Sky Bingo.

There are two ways you can access the game. The first is via the website and the second is via a downloadable app for iOS devices, which you can obtain direct from the App Store. You can play via desktop or mobile devices equally easily.

Once you have opened the app or loaded the website, you simply log in to the site using your SkyBet login data, your username and pin number and you are then ready to go.

What matches are the Sky Fantasy Six-A-Side game available for?

Each game week Sky will pick one of their live games as the focus for the Sky Fantasy Six-A-Side game. Usually this will be the game played at 4pm on a Sunday, but Sky may elect to offer the promotion on some key midweek games too.

It is entirely at the discretion of Sky as to what games they offer for this promotion. Only one game is selected per game week for the offer.

How do I play Fantasy Six-A-Side?

In Fantasy Six-A-Side players from the two teams competing in the match chosen that gameweek are available  for selection. There are essentially two groups of players.

For each game, four players from each of the teams competing (usually two from each team) will be identified as an Elite Player. These are players that generally score high points totals when they 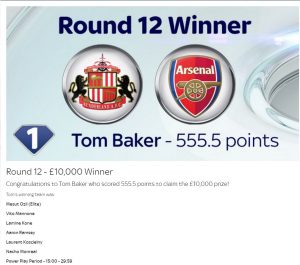 play games.  You can select just one of the four elite players for your team.

The remaining players in each of the two teams squads are then listed as Team Players. You can pick five players from the list of players with no restrictions to make up your Fantasy Six A Side team. Players are listed by positions, but there is no need to pick a certain formation using a goalkeeper, defender, midfielder or attacker for your team. You can make your Six-A-Side team up using any of the players available. The only rule being it must be comprised of one of the Elite Players and five Team players.

Unlike Fantasy Football, where each player is assigned a cash value which is deducted from your team budget, Fantasy Six A Side has no player values, so it a much easier game to pick six players who you think will score the most points in the game.

One thing to watch out for however is when players are injured or suspended. This is indicated on the information displayed for each player, complete with how many points they scored in their last game and what their Fantasy Points average is at the moment.

Once you have picked your team, you are almost done but there is one more key thing to pick and that is the Power Play period.

The Power Play period is a 15 minute spell of the match where all the players in your team will score double points for what they do on the field. You can pick from six 15-minute intervals.

Once you have selected which one of the six periods you want to be your Power Play, you then click onto the next section, the tie breaker, which sees you enter the minute you think the first goal will be scored in the game.  This is not used to calculate your Fantasy Six A Side score, but is used only in the case of a tie between two teams in the tournament.

Once you have completed this, click on the button to enter your team and you have now given yourself a free chance at winning the £10,000 prize on offer for this game week. 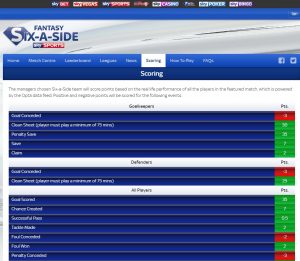 How do my players score points for me?

During the game players score points for completing a number of different things in the game. The full list of how points can be earned and lost by players is shown under the Scoring section on the app and website.

Rudimentary skills, such as completing a pass or making a tackle, score fewer points than rarer events, such as scoring a goal, creating a goal, saving a penalty or keeping a clean sheet.

Each of your player will score a number of points based on their performance in the game and these individual points are then added together to give your team points score.

The team that has the most team points score on a game week will win the £10,000 prize.

How much does it cost to play Fantasy Six-A-Side?

Will Fantasy Six-A-Side return next season?

Given the popularity of the promotion and the fact that it is being heavily promoted at the moment on the Sky Sports shows on a Sunday afternoon, it is a good bet that Fantasy Six-A-Side will be returning for next season, although no official confirmation from Sky is available to corroborate that at present.

Could Virtual Soccer Make You A Real Winner At Bet365?