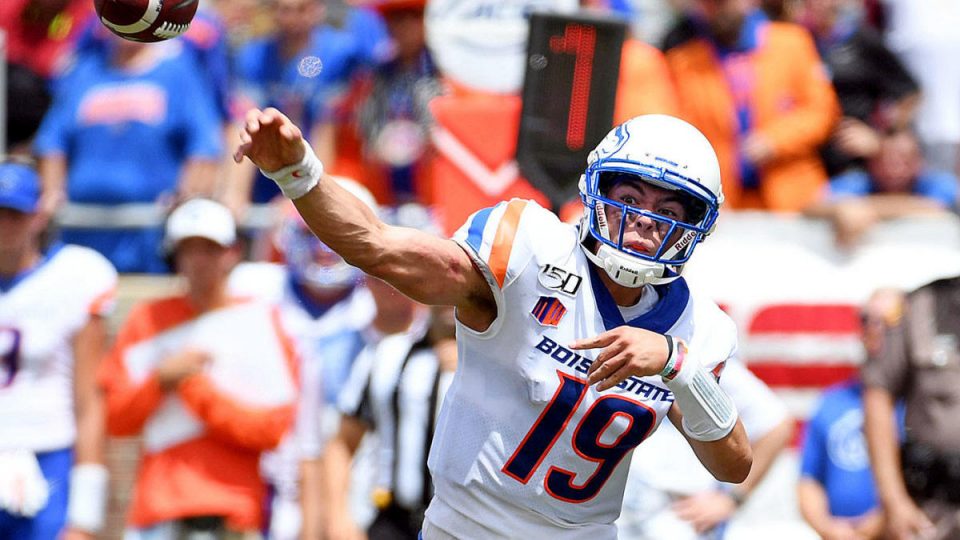 Week one of the college football season has come and gone, and week two will kick off Friday night. There is another full slate of games on tap, and there are some terrific betting matchups. There are a number of teams to bet on in week two throughout the college football landscape, but we have narrowed our search to games featuring Top-25 teams.

Let’s take a look at the five top teams to bet on in week two of the NCAA football season, with odds and reasons given.

The first team on this list will play on Friday night and will kick off a nice weekend of winning if you bet on them. The Boise State Broncos will host the Marshall Thundering Herd in a battle of 1-0 teams. Boise State is a 12.0-point favorite in its home opener after pulling off a dramatic come-from-behind victory over the Florida State Seminoles. Marshall earned a 56-17 win over VMI, but this will be a huge step up in competition.

Broncos quarterback Hank Bachmeier threw for 407 yards and one touchdown in week one and should have another big game in this one. Marshall just simply doesn’t have the talent or depth to keep up to win this game, and the Boise State Broncos are going to roll on the blue turf. Boise State is going to easily cover the 12.0-point spread in this game.

Week one of the Ryan Day era went surprisingly well in Columbus, as Ohio State had little trouble rolling to a victory. The Buckeyes blew out Florida Atlantic 45-21 in their season opener. Ohio State will now take on in-state rival Cincinnati, and they will be 16.0-point favorites. The Cincinnati Bearcats are also 1-0 on the season after beating the UCLA Bruins by a score of 24-14.

The Bearcats looked impressive in their season opener, but taking on the Buckeyes in Columbus is never an easy task. Ohio State introduced new quarterback Justin Fields a week ago, and he had 234 passing yards and four touchdowns. Cincinnati is going to hang around until halftime, but this game feels like a rout. Bet the Ohio State Buckeyes -16.0 over the Cincinnati Bearcats.

Oregon heads home this week after suffering a devastating loss a week ago to Auburn. The Ducks led for the entire game but saw the Tigers slip past them in the final seconds of the game. Oregon will be taking on a Nevada Wolf Pack team that pulled off a miraculous win of their own in the season opener. Nevada kicker Brandon Talton made a game-winning field goal as time expired to stun Purdue a week ago.

The Wolf Pack are 24.0-point underdogs in this game, but they will have a ton of momentum and confidence. Oregon is the much better team in this matchup, but Nevada will keep this one close. Stay away from the moneyline in this game, but take the 24.0 points and bet on Nevada in this game.

The biggest game of the weekend features the Auburn Tigers and Texas Longhorns. Both of these teams are ranked in the top 10 coming into this game, and the winner of this game will get a huge boost in the playoff standings. Both the Tigers and Longhorns looked sharp in their season openers, but this will be a much tougher battle for each team. Injuries have hit the Texas team hard already this season, especially at the running back position.

LSU quarterback Joe Burrow went 23-27 for 278 yards and five touchdowns in the season opener and finally gives the Tigers an elite passer. Neither team is going to break open a huge lead in this game, but the Tigers will win by at least a touchdown. Bet the LSU Tigers -6.0 over the Texas Longhorns in week two.

The final team to bet on this weekend is the Central Michigan Chippewas. The Chippewas are traveling to Madison, Wis., to take on the 17th-ranked Badgers, and they are getting no respect. Central Michigan beat Albany by a final score of 38-21 in the season opener, but this will definitely be a tougher test.

Wisconsin blew out USF, winning by a score of 49-0. The Badgers should be one of the top teams in the Big Ten this season, but they don’t have a ton of great athletes. Look for the Chippewas to stick around in this game, before eventually losing by a few touchdowns. Wisconsin wins the game, but it would be wise to take the Central Michigan Chippewas at +35.0.

How Will The Home Nations Fare In Their Euro 2020 Qualifiers?

All The Top Weekend Premier League Previews and Tips