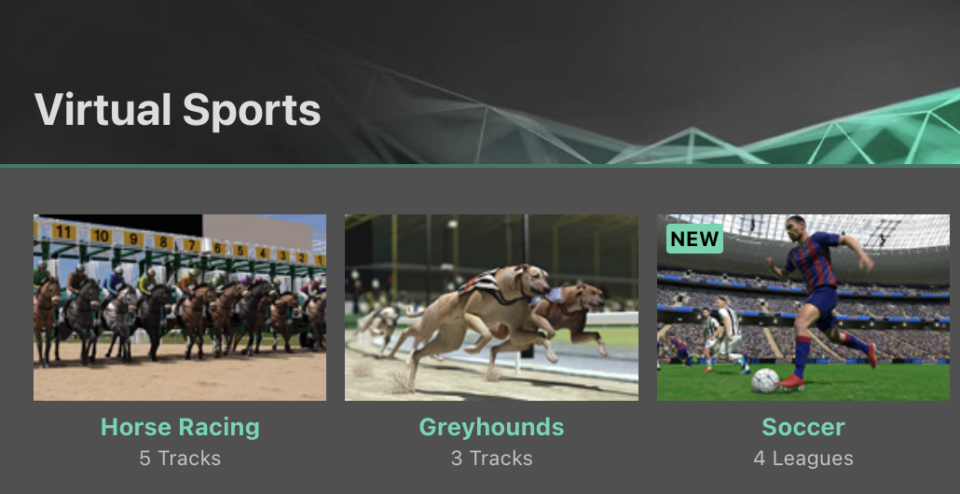 We have looked at some of the different Virtual Sports betting options available at bet365 over the years and what you can see is that this particular niche market of sports betting has increased markedly in popularity over the years.

In fact, Virtual Sports are now so popular that for many sites, they are their third biggest revenue generator, just behind soccer and horse racing betting.

Little wonder then that there has been an increase in the number of companies that offer Virtual Sports games to betting sites and also that the number and quality of these games has increased massively over recent years.

So that means it is a perfect time to once again head over to the bet365 Sport Virtual Sports betting section and take a look at what the site has to offer.

And compared to a few years ago, the change has been marked!

What Improvements Have Been Made To Virtual Sports Gambling Over The Last 7 Years?

In general, there have been three major improvements made to the Virtual Sports betting industry over the last few years.

It wasn’t that long ago that Virtual Sports was confined to Virtual Horse Racing, Virtual Soccer and perhaps another couple of Virtual Sport offerings.

Now though, given the plethora of companies now developing Virtual Sports titles for betting site providers, the number of different Virtual Sports available has increased markedly.

Not only have the number of sports available increased, but the number of race or tournament variations on offer to customers within a single Virtual Sport has increased too.

At Bet365 Sport for example, there use to be just a couple of Virtual Horse Racing meetings available, but now there are considerably more options (which we will look at in more detail below).

That pattern of more options has been followed in many other popular Virtual Sports titles, notably soccer and also greyhounds and American Football and Basketball.

As technology has improved, so to has the ability for companies to be able to offer more betting markets on their virtual sports than previously.

This means that over the last few years, the number of markets you can bet on with some virtual sports has increased hugely, for others the increase has been more modest.

More recently released games are the best source of these increased number of markets, but regular updates to even the older games has improved the number of markets you can bet on for a Virtual Sport fixture.

Perhaps the most obvious improvement in Virtual Sports over the last 7 years or so has been in their presentation.

The next generation of Virtual Sports games which you can play now have more varied commentary options, much improved graphics, which are not only higher resolution, but which also include video to provide as lifelike an experience as possible.

There are also many more ‘passages of play’ incorporated into the newer games, so you get less repetition of the same kind of goal being scored and similar.

So those are the major improvements made in the Virtual Sports industry over the years, so let us now see how that has translated into more options for you to play Virtuals at bet365 Sport.

In this section, we are going to list each Bet365 Sport Virtual and then underneath, list the different options available for you to bet on in each of those Virtual Sports together with how long each betting fixture takes to complete from start to finish.

There are now five different horse racing Virtual Sports options including 1 minute bullet racing, for quickfire race events taking just a minute, up to the longest and newest addition, a recreation of the latter stages of the famous Grand National race held each year at Aintree in Liverpool.

There are also two flat racing options and a jump racing virtual, all of which take three minutes per event to be run.

Virtual Greyhounds offers options over the hurdles and on the flat, as well as a 1-minute bullet racing option, which is very similar to how the horse racing version works.

The Virtual Soccer options now include a Premiership-based option and a World Club Cup-based option which features teams from all over the world, with similar sounding names to their real-life counterparts.

Virtual Cricket has expanded to two options recently, in addition to the International Cricket based game, there is also one based on the Indian Premier League, both of which use the same one over format to decide the winner.

The new Virtual American football offers three different types of game. The Bradwell Field and Fenton Field games are based on the NFL (and in the case of the NFL Alumni, former NFL superstars)  and show highlights throughout the full game over the 3 minute duration.

However the Queensway Park American Football Virtual is based on one entire drive and uses fictional teams.

Virtual Darts features real-life players captured on camera. These retired players are randomly assigned to play each other across one full game of darts.

Both Virtual Basketball games show highlights from all four quarters between two randomly selected teams. One is based on NBA teams in the United States and Canada, while the other is based on European professional basketball teams.

One of the bet365 original Virtual Sports, this is a 12-car race over one lap and is based on the oval circuit Indycar.

Another original from bet365, the Sterling Stadium offers a standard Speedway race between four riders contested over 2 laps.

Based on the Keirin race in cycling, this race features between 6 and 9 riders competing against each other in a single race contested over three laps.

The grass court Virtual Tennis features one game between two players at the fictional Matthews Open.

The newest addition to the Virtual Sports fold at bet365, Virtual Golf has two options, which are both contested over one hole between two players. This is the longest in duration Virtual Sport at eight minutes per event.

Having expanded their selection of Virtual Sports greatly over the last few years, it is going to be interesting to see what the future holds for Virtuals at bet365 Sport.

7 Steps To Work Out Your Gaming Budget