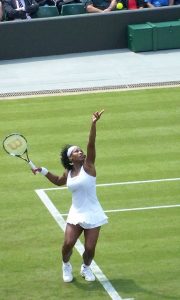 to a close, or get under way.

As per usual, we’ll be recommending the best place to bet on when it comes to these different betting markets and as always, Bet365 Sport is a fantastic place to start with an outstanding free bets and sport bonus of up to $100 available for new customers. Even if you have signed up with another Bet365 site, if your bonus has expired, you can still claim this excellent sports betting bonus.

So what sort of things have we got lined up for this week in terms of sports betting? Well, there are a total of four major sports events taking place this week that all have outstanding betting ready to be enjoyed on them, both pre-event and also in play. Let’s take a look at each in a little more detail:

The second week of the Wimbledon Championships began on Monday with some shock results as Rafael Nadal was eliminated from the tournament by Gilles Muller, a grass court specialist. British hopes remain strong with both Andy Murray and Johanna Konta confirmed as quarter finalists while the remaining men’s Fourth Round match between Novak Djokovic and Antonio Mannarino, which was delayed due to the lengthy Nadal – Muller clash, will take place today.

Other than this tie, the men now have a rest day ahead of the quarter finals which take place on Wednesday and it promises to be an intriguing set of games. Tomas Berdych awaits the winner of the Djokovic/Mannarino clash, while Milos Raonic will take on Roger Federer, Gilles Muller faces Marin Cilic and Andy Murray will face off against big serving American Sam Querrey.

There’s some fantastic betting to enjoy on these games, plus all the doubles action at Wimbledon with Bet365 Sport. There is the Tennis Accumulator Bonus available on all matches in the Singles and Doubles draws at the event, plus a whole host of pre-event and In Play betting to enjoy across the full range of matches.

Betting on the outright market in both the men’s and women’s event is still available and now Roger Federer is the 6/4 favourite to win, ahead of Novak Djokovic at 11/4 and Andy Murray at 7/2. Marin Cilic is a 13/2 shot and after that you are looking generally at outside bets with Milos Raonic 22/1, Gilles Muller 28/1, Tomas Berdych 40/1 and Sam Querrey 80/1.

In the women’s event it is a much closer call with just ten points separating the favourite, American Coco Vanderweghe at 4/1, from the two outside bets Magdalena Rybarikova and Svetlana Kuznetsova who are both 14/1 shots. Jo Konta and Garbine Muguruza are both ranked 9/2 chances while Venus Williams is an 11/2 shot, Simona Halep 6/1 and Jelena Ostapenko a 7/1 shot.

Last week saw England take on South Africa in the first test match of four between the teams scheduled to take place this summer. It was Joe Root’s first test as the new England captain and he oversaw his team record a comprehensive 119-run victory over the second best test side in the world, according to the ICC Rankings computer.

Leading 1-0, England now head into the second match this week in Edgbaston Birmingham knowing that another win here would ensure them of at least drawing the series and make them unbackable favourites to win it outright. England have already named an unchanged team from the first test match for the second, which kicks off this coming Friday.

South Africa cannot do that as fast bowler Kagiso Rabada is suspended for this game after accruing four disciplinary points over the year. It’s a tough time for the Proteas at the minute with a number of key players injured and a serious lack of form, especially with the bat in their last innings when they were fortunate not to be scuttled out for less than 100 runs.

Bet365 have England as the strong 8/13 favourites to win the second test, with 11/4 the draw and South Africa the 9/2 shots to win. That seems about right given the performances of the teams during the first test, however much will depend on the toss with both teams likely to want to have a bat on what is generally considered a batsman-friendly wicket.

This weekend sees the 50th time the British Grand Prix will be held at Northamptonshire’s famous Silverstone track, although with wrangling continuing over the F1 contract at the venue, it may also be the last held there for some time.

After finishing second last week to Valtteri Bottas in Austria, Sebastian Vettel extended his lead over Lewis Hamilton (who finished fourth after starting eighth on the grid due to having an unscheduled gearbox replacement) to 20 points and the British driver will be absolutely determined to close that gap in what is his home Grand Prix.

Issues with his Driver safety equipment in Baku and a troublesome gearbox before the race in Austria have cost Hamilton clear opportunities to close the gap on Vettel and instead the German has pulled away again by a few points. Hamilton will be hoping that racing in front of what will predominantly be his own supporters, may change his luck for the better.

However, the British driver now has to look in his rear-view mirror too as after his second win of the season, Valtteri Bottas is now just 15 points behind Hamilton in third place in the Driver Championship and the Finn will know a few more wins would catapult him into serious contention alongside Hamilton and Vettel.

It promises to be an intriguing weekends racing and the action begins on Friday with practice sessions followed by qualifying on Saturday and the race itself on Sunday. Bet365 are offering a wealth of betting options on the race, with Lewis Hamilton the slight favourite to win on home soil at the moment.

Kicking off this weekend in the Netherlands is the women’s Euro 2017 tournament which features both England and Scotland alongside 14 other sides from across Europe seeking to become the champion team on the continent.

All the top sides including Germany, Norway, France and Sweden are in the tournament which consists of four groups of four teams, which have been drawn as outlined below (numbers in brackets indicates current FIFA World Ranking):

The top two sides in each group after all teams have played each other once, will qualify for the quarter finals and from there it is a straight knockout through to the final which will be played on August 6th.

Bet365 have Germany as the 2/1 favourites to win the tournament, with France an 11/4 shot. England are 7/1, with the Netherlands 10/1 alongside Sweden. Spain are 16/1 and Norway 18/1. The rank outsides are the Russia and Portuguese women’s teams who are both rated as 250/1 outsiders for the tournament.

Tee Off This Week With Some Quality Open Golf Championship Tips