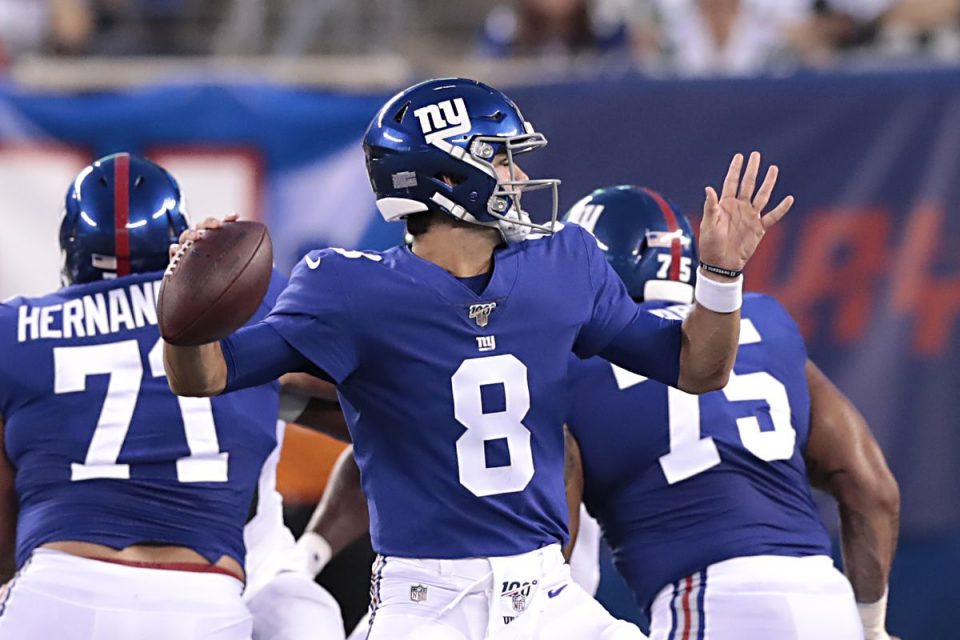 Week three of the NFL preseason is set to begin this weekend, and there are several good betting options available. NFL teams are usually more inclined to play their starters more in the third preseason game, but there will be several teams who continue to play only reserves. Let’s take a look at five of the best games to bet on this weekend.

The New York Giants come into this game with a preseason record of 2-0, and they have been extremely impressive. Running back Saquon Barkley has not been on the field much through their first two games, but it has not slowed down the Giants offense. Quarterback Daniel Jones has been getting plenty of reps in hopes of getting him comfortable before the season opener.

The Giants also have a talented third-string quarterback in Alex Tanney. Cincinnati is 1-1 so far this preseason, but they are the favorites in this game. The Bengals have a talented defense yet again, but their offense is still going to be a mess. Take the 3.0 points and bet the New York Giants over the Cincinnati Bengals.

Bill Belichick and the New England Patriots usually don’t care about winning preseason games, but they have been extremely successful through their first two matchups. The Patriots have won a pair of road games this preseason, and they have looked dominant in each game.

The Carolina Panthers looked sharp in week one, before getting dominated by the Buffalo Bills in week two. Carolina has been holding out their top players as well, and that isn’t going to change in this game. The Patriots are finally getting to head home this weekend, and they will put on a show for their home fans. Bet the New England Patriots -3.5 over the Carolina Panthers.

One of the more interesting games on the week three schedule will be a matchup between the Buffalo Bills and Detroit Lions. The Lions will be one point home favorites in this game, but they are 0-2 so far this preseason. Buffalo comes into this game with a 2-0 record, and they have looked pretty sharp in their two victories. The Bills and Lions are both expected to miss the playoffs this season, but both teams should be much improved from a season ago.

The Bills were an absolute mess at quarterback and on offense in 2018, and the Detroit Lions couldn’t figure out a way to stop anyone. This should be a close game on Friday night, but it just feels like the perfect chance for the Lions to get a win. This likely won’t be one of the crisper preseason games ever played, but it should be competitive. Bet the Detroit Lions +1.0 vs. the Buffalo Bills.

The New Orleans Saints are just -3.0 point favorites over the New York Jets in this game, but that number feels a bit low. Both teams have been inconsistent through their first two preseason games, but more regulars are expected to play in this game. The Jets struggled mightily on offense in their week one loss to the New York Giants, but then looked great on defense in beating the Atlanta Falcons.

New Orleans suffered a 34-25 home loss to the Minnesota Vikings in week one but bounced back with a two-point road victory in week two. The Saints just have too many offensive weapons to be shut down in this game, even though some of their starters will be on the bench. The Jets have looked like a much-improved football team, but they still have some things to work on. Bet the New Orleans Saints -3.0 over the New York Jets.

The two Texas teams are set to square off for a showdown on Saturday night. This is a pick’em game, and both of these teams are extremely similar. Dallas and Houston both made the playoffs a season ago, but now each team is trying to figure out how to take the next step.

Houston has had a very quiet offseason and training camp, but that hasn’t been the case with the Cowboys. Contract disputes, holdouts, suspensions, and an inappropriate joke from the owner have all brought distractions to Dallas.

The Texans and Cowboys are both 1-1 so far in the preseason, and there have been some weak moments from both teams. Look for this to be a tight game throughout, but Dallas will get the win at home in front of their passionate fans. Bet the Dallas Cowboys EVEN over the Houston Texans.

Who Should I Back to Win the Singles Tournaments at Next Week’s US Open?